PulseNet Canada is an electronic network which links databases from the provincial public health laboratories, the Canadian Food Inspection Agency (CFIA), and the Public Health Agency of Canada (PHAC) together. This national network is dedicated to tracking the DNA fingerprints obtained through PFGE including E. coli O157, Listeria monocytogenes, Salmonella, and Shigella. Finding similar PFGE patterns through PulseNet, scientists can determine whether an outbreak is occurring, even if the affected persons are geographically far apart. The network is coordinated by the National Microbiology Laboratory (NML) located in Winnipeg, Manitoba.

PulseNet Canada reports that there is a new multi-provincial cluster of six E. coli O157:H7 isolates with the same PFGE patterns in Manitoba (n=2), Saskatchewan (n=3) and Alberta (n=1). All six were newly reported to PulseNet Canada.

Question 1-2: An outbreak is commonly defined as the occurrence of illness in excess of its expected frequency in a defined community, geographical area or time frame. For foodborne illness, an outbreak usually refers to two or more illnesses resulting from a common food source.  Is this an outbreak? What additional information may you need to assess if an outbreak is occurring? How will you get this information?

Following your request for information regarding the six E. coli O157:H7 cases, PulseNet Canada shares the following information, as well as a graph depicting the frequency of this PFGE pattern combination (Module 1 – PFGE frequency):

The frequency graph shows that six isolates in one month is above expected levels, further suggesting this is a cluster of cases worth investigating. 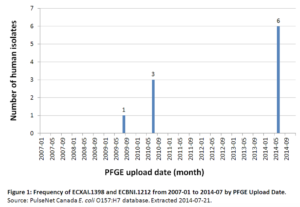