The outbreak was first identified nationally on July 21, 2014 when the National Enteric Surveillance Program reported an increase in E. coli O157 cases nationally, as well as in Saskatchewan and Manitoba. Subsequently, a cluster of six cases of E. coli O157:H7 with matching PFGE patterns was reported by PulseNet Canada. Prior to this, on July 18, 2014, Saskatchewan identified a cluster associated with a Canada Day BBQ; this cluster was subsequently linked with the national investigation.

Confirmed case: A resident or visitor to Canada with

Probable case: A resident or visitor to Canada with

Suspect case: A resident or visitor to Canada with 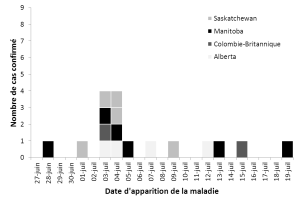 Of the eight cases that were interviewed with the hypothesis-generating questionnaire, seven reported eating hamburgers but five could not remember the brand. One case did not report hamburger exposure.

All seven cases that were interviewed with the focused questionnaire reported exposure to the frozen hamburgers. Of those, 6/7 could recall the brand of the products they ate, and all (6/6) reported consuming either Farmer Fred’s Burgers or Happy Burger frozen hamburgers. 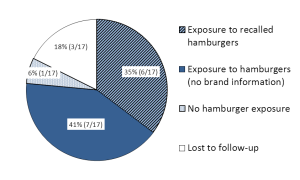 Traceback conducted by the Canadian Food Inspection Agency (CFIA) identified that the two brands of burgers reported by interviewed cases, Happy Burger and Farmer Fred’s Burgers, were produced at the same facility in the same time frame. The facility is located in Alberta and produces two other brands of burgers in addition to the recalled brand. A recall was issued on August 3, 2014, for all burgers produced on June 2 to June 8, 2014 at the facility. This included two lot of Farmer Fred’s Burgers and one lot code of Happy Burger.

CFIA began an inspection of the facility on August 1, which included the collection of product and environmental samples. The facility inspection did not reveal any items of concern.

Samples were collected from the homes of two cases. One was an open box of Happy Burger, the other was an open box of Farmer Fred’s Burgers. Both tested positive for the presence of E. coli O157:H7. The PFGE pattern of these samples matches the outbreak strain.

The likely sources of illnesses in this outbreak were two different brands on frozen hamburgers produced at the same facility: two lots of Farmer Fred’s Burgers and one lot of Happy Burger. These products were effectively recalled, however, it is possible that additional cases associated with this exposure will be reported, due to the long shelf life of these products.