An epidemic curve (or epi curve) is a histogram (bar chart) that shows the distribution of cases over time. The time intervals are displayed on the x axis (the horizontal axis), and case counts are displayed on the y axis (the vertical axis). The result is a visual representation of illness onset in cases associated with an outbreak. The epi curve is an essential tool in an outbreak investigation and a key feature of descriptive epidemiology. It can provide useful information on the size, pattern of spread, time trend, and exposure period of the outbreak, and is often included in the epidemiological (epi) summary. The epi curve should be continuously updated as the outbreak progresses.

Whether creating an epidemic curve on paper or in a software program, these are important things to consider:

Epi curves can be a powerful way to tell a meaningful story about the outbreak, even without lengthy text to explain the figure. While the general structure of epi curves are similar, there are ways to use the outbreak data to enhance the message.

Using different scales for the x-axis

The unit of time on the x-axis is usually based on the incubation period of the disease and the length of time over which cases are distributed. For example, for a disease with a short incubation period (e.g., Bacilius cereus) and cases distributed over a short period of time (hours), the scale for the x-axis may be more meaningful by hour rather than by day. Several epi curves with different units on the x-axis can be drawn to determine which portrays the data best. This is particularly useful when the disease and/or incubation is unknown.

A case may have many dates associated with their illness: illness onset date, report date, hospital admission date, specimen collection date, laboratory testing date, etc.  While the general practice is to use illness onset date for all cases, these may not be readily available – for example, when a case could not be reached for an interview. To address this issue, the earliest available date for the case should be used to approximate the case’s illness onset.

For some outbreaks, cases can be stratified (or separated) in the epi curve to help the reader understand the outbreak, particularly when there may be an interesting difference between the groups. There are often many ways to organize or separate outbreak cases into categories, such as:

For example, the first epi curve includes all cases in one group by illness onset.  The second epi curve stratifies cases by patient location on the hospital ward. 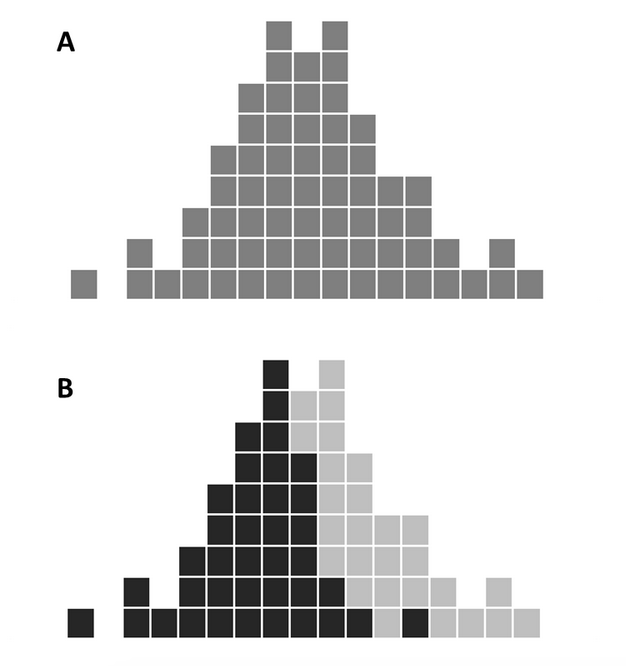 In this case, the stratification shows that the outbreak began on hospital ward A first (illness onset of patients on ward A were earlier than ward B).  Being able to visualize the data in this way can help you hypothesize or understand key questions about the outbreak, such as how the pathogen is being transmitted from one ward to another.

Events of significance to the outbreak

Key events that occur during an outbreak can be added to the epi curve as a way to tell a more comprehensive story about why cases are distributed in a particular way. The timing of these events may help describe visible changes on the epidemic curve.  Some examples include:

These events can be incorporated onto the epi curve using text boxes and arrows. However, it is important to keep in mind that the overall epi curve should still remain simple and easy to understand.

As well as visually depicting distribution of cases over time, the epi curve can tell investigators a number of other things about the outbreak. These include: size, time trend, outliers, and pattern of spread.

The size of your epidemic curve can help validate whether you are in an outbreak by showing an increased number of cases over the baseline visually. Knowing the number of cases affected may also help you generate and refine your hypothesis.

The epi curve can provide information on the progression of the outbreak (e.g., if the outbreak is ongoing, increasing in size, stabilizing, decreasing, over, etc.). The epi curve will also depict the rate of increase or decrease of cases over time. When you are at a point where you would like to declare the outbreak over, it is important to ensure that the decline in cases is a true decrease and not due to a reporting delay. As there are inherent delays between when a case becomes ill and the date that public health is aware of the case, this means that the full picture of the outbreak will not be available, particularly for the most recent time period (e.g., days).

The outbreak curve can also identify outliers – cases that stand apart from the overall pattern such as the first, or index case thereby providing important clues about the source of the outbreak. Outliers can also result from secondary transmission.

The overall shape of the epi curve may help identify the mode of transmission of the outbreak. There are several well-described types of epi curves: point source, continuous common source, propagated source, and intermittent source. 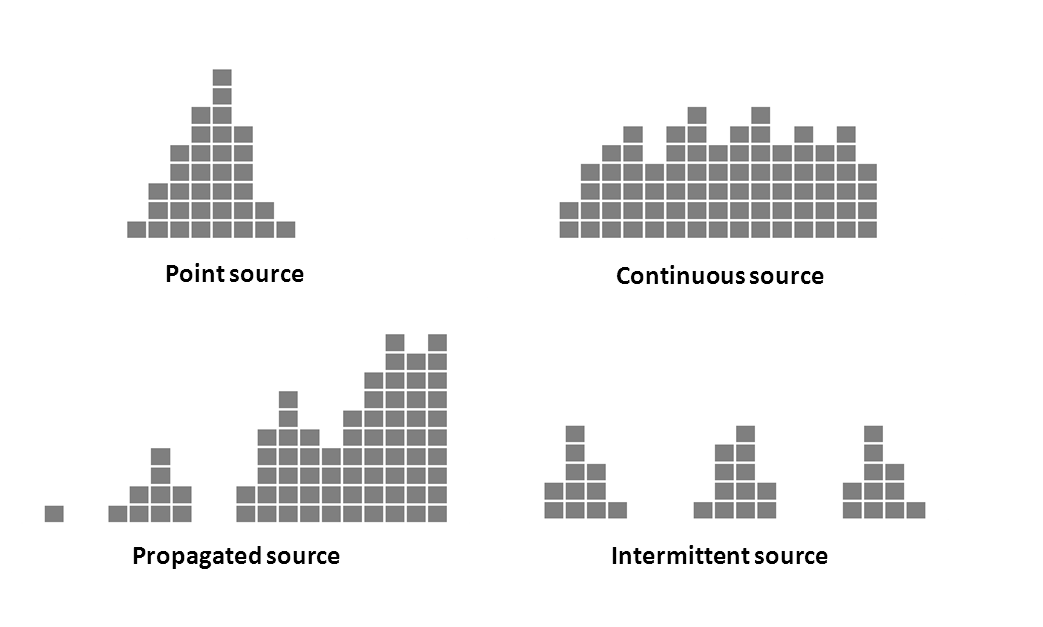 The shape of an epidemic curve will rarely fit any of these descriptions exactly, but can still provide a general sense of the pattern of spread. In some cases for example, the outbreak type is a mixed outbreak pattern, which can involve both a common source outbreak and secondary propagated spread to others (usually household members).  Many foodborne pathogens (such as Norovirus, hepatitis A, Shigella and E. coli) commonly exhibit this mode of spread.

Further reading: Association of Faculties of Medicine of Canada. AFMC Primer on Population Health, Patterns of disease development in a population: the epidemic curve.